The National Trust has been criticised for its country houses in recent days, but there are hundreds of others still in private ownership whose fam


The National Trust has been criticised for its country houses in recent days, but there are hundreds of others still in private ownership whose families are eager to welcome visitors in the wake of the pandemic.

Photographer Dylan Thomas and I have visited a fine selection for our book Old Homes, New Life: The Resurgence Of The British Country House, all of which have been passed down the generations without being sold for at least 300 years — and sometimes far longer than that.

They offer a feast of fascinating history, glorious architecture and beautiful parks and gardens for the Bank Holiday weekend and beyond…

Inveraray is one of the great showpieces of Britain. Towered and turreted, the castle rises against a background of forest and mountain.

In front of it is Loch Fyne, fringed by one of the military roads built after the 1745 Jacobite Rebellion. One of the present Duke of Argyll’s daughters likes living there because she can ride her Segway around the basement.

The present castle was built for Archibald, 3rd Duke of Argyll by the London architect Roger Morris, to a symmetrical scheme that may not have been authentically Gothic but was an early example of Georgian castle design. 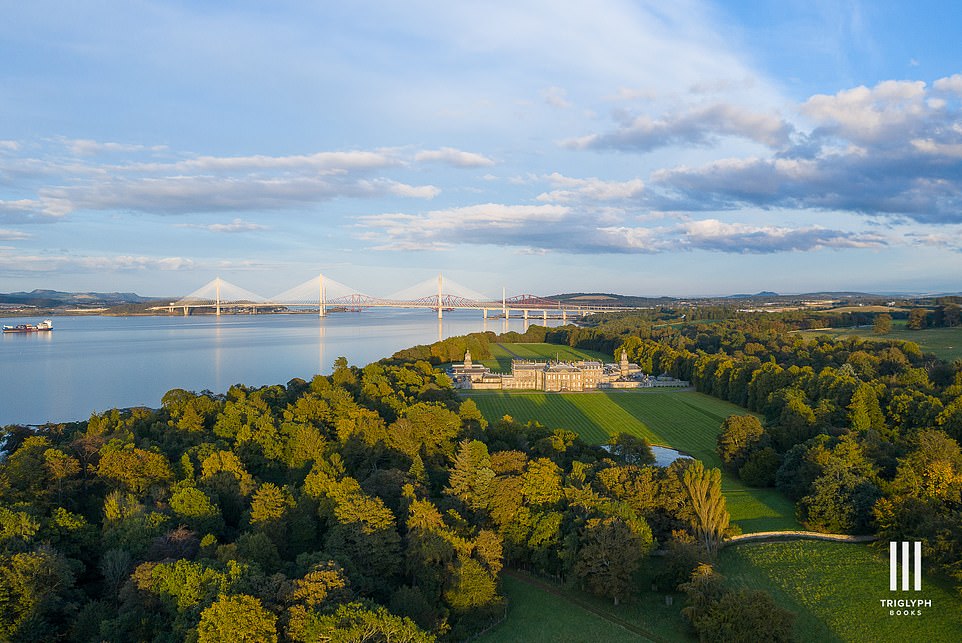 Hopetoun House in West Lothian (above) is regarded as Scotland’s most handsome country house in the Classical style, built for Charles Hope, 1st Earl of Hopetoun, by his mother

The bluish-green stone of the facade with which it was faced came from further down the loch, while the inside of the walls is made from local granite. Work lasted 60 years. A two-house Christmas special of Downton Abbey was filmed here in 2012.

Don’t Miss: The Armour Hall in the centre of the castle, 70ft high. When it was painted a few years ago, the project required 50 tons of scaffolding and 800 litres of paint.

Hopetoun’s entrance front looks towards the Firth of Forth (and today’s elegant Queensferry Crossing bridge) and enfolds the visitor in the arms of two quadrant wings, ending in pavilions.

Hopetoun is regarded as Scotland’s most handsome country house in the Classical style, built for Charles Hope, 1st Earl of Hopetoun, by his mother (Hope was only a baby when his father died in 1682).

The architect was Sir William Bruce. In the 1720s, the Earl had his house made even grander by William Adam. When Adam died in 1748, work was continued by his sons, John, Robert and James.

The name Hutton-in-the-Forest evokes the wilderness that was Cumberland in the Middle Ages.

Today, the original tower house that forms the nucleus of the home here has been engulfed in later additions. 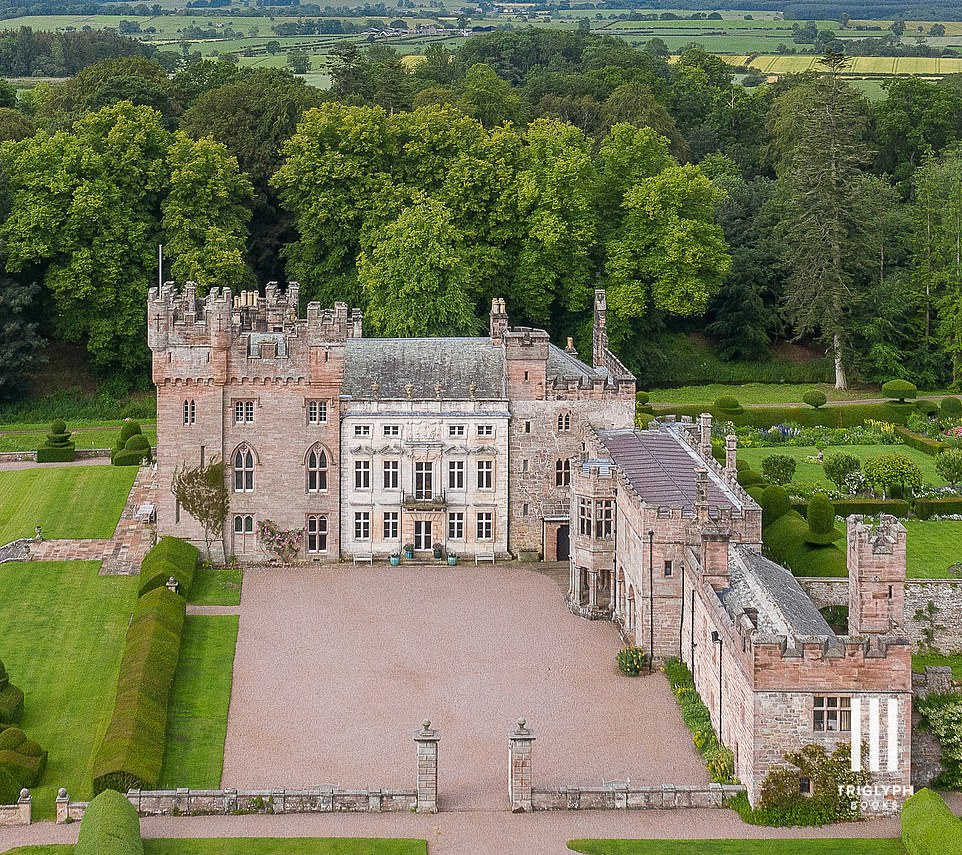 Hutton-in-the-Forest is now the home of Richard, 2nd Lord Inglewood. His wife Cressida has decorated it with contemporary ceramics and hand-printed textiles

Sir George Fletcher was a conspicuous builder before and after the English Civil War but then, in the Victorian period, it was romantically unbalanced by the architect Anthony Salvin, aided by George Webster of Kendal, who built the south-east tower.

Hutton is now the home of Richard, 2nd Lord Inglewood. His wife Cressida has decorated it with contemporary ceramics and hand-printed textiles, and created an idyllic garden.

Open: Gardens daily, except Saturday, from 1pm-4pm. Tickets £5 at hutton-in-the-forest.co.uk.

Next to the big house at Burton Agnes in Yorkshire stands a fragment of a Norman manor built around 1180. Since then, Burton Agnes has never been sold.

The present building arose between 1601 and 1610: a symmetrical composition of rosy orange brick silvered with lichen that was designed by Robert Smythson.

Anne Griffith, a daughter of the builder of the house, Sir Henry Griffith, died young and is said to be the family ghost.

Today’s chatelaine, Olivia Cunliffe-Lister, sees the house ‘as the sum of the involvement of so many thousands of people over more than four centuries’. 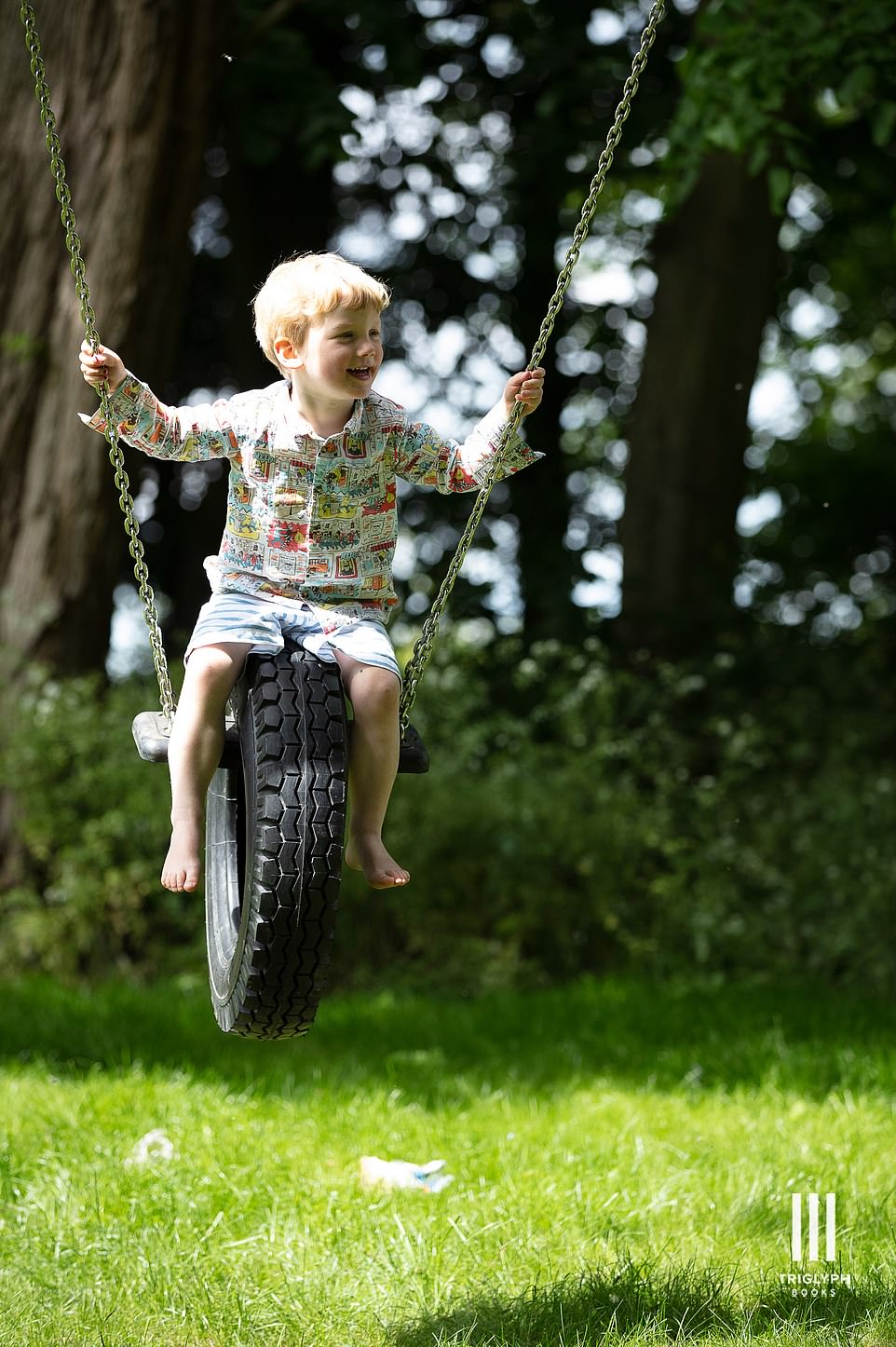 Next to the big house at Burton Agnes in Yorkshire stands a fragment of a Norman manor built (above) around 1180. Since then, Burton Agnes has never been sold

Artist David Hockney often visited Burton Agnes when he lived nearby. A zealous attendee of the estate’s Snowdrop Festival once chastised Hockney for sitting among the flowers.

This is one of those country houses you find only in Britain. The attics are full of old toys, military headgear, unwanted commodes and a giant figure of the White Rabbit, left over from an Alice in Wonderland-themed event.

Tapestries are used like wallpaper and there are so many that the house needed its own textile studio to repair them.

A collection of Roman antiquities is displayed in the downstairs loo, alongside a child’s pedal-operated aeroplane with patriotic RAF roundels. From the upper floors, you can see Lincoln cathedral on a good day. 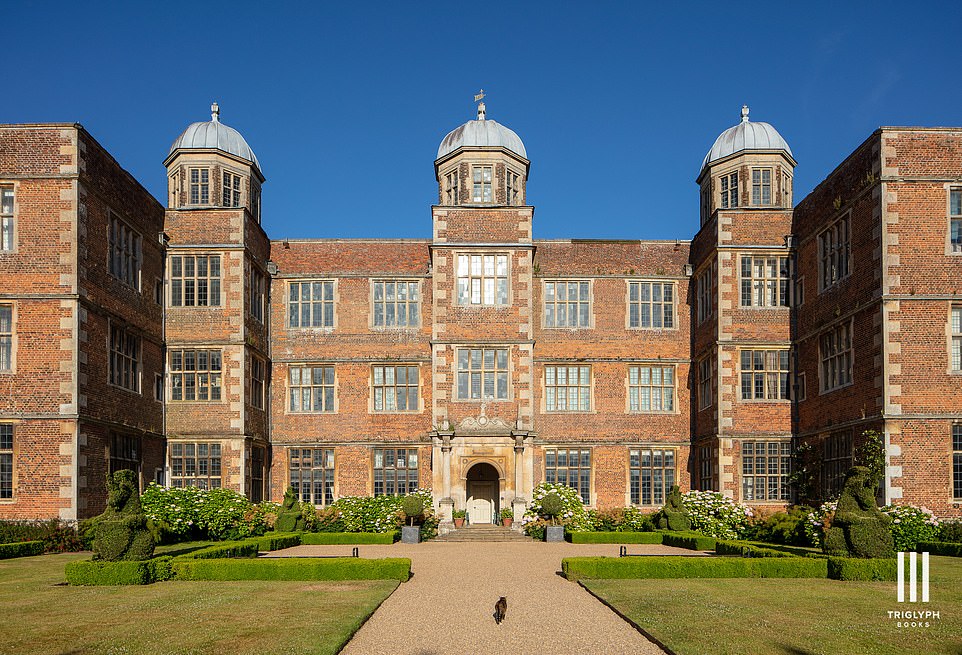 Doddington Hall’s attics are full of old toys, military headgear, unwanted commodes and a giant figure of the White Rabbit, left over from an Alice in Wonderland-themed event

Doddington seems hardly changed since it was built around 1600. In mid 20th-century, tin bathtubs were positioned to catch leaks from the roof.

It’s not like that now. The present owners, James and Claire Birch, have created a shopping experience out of the stables, with farm shop and café, a bicycle emporium and country clothes store.

Don’t miss: Sweet chestnut trees from the 17th century beside the croquet lawn.

You first see Helmingham as a flush of rosy brick, at the end of an avenue of ancient trees.

Deer graze the 400-acre park which the owner, the Hon. Edward Tollemache, generally known as Ed, calls ‘our own wildlife sanctuary’.

The house, built in the Tudor period, reimagined around 1800 and enlarged for a family with enough sons to field a cricket team in the Victorian period, is long and low, its silhouette enlivened with fanciful chimneys and finials.

Last year, the illuminated garden trail attracted 9,000 visitors. This year’s event is due to take place Wednesdays-Sundays, November 18 to December 13.

Don’t miss: A trio of oaks known as the Three Sisters, misshapen with age, still clings to life after seven or eight centuries of existence. 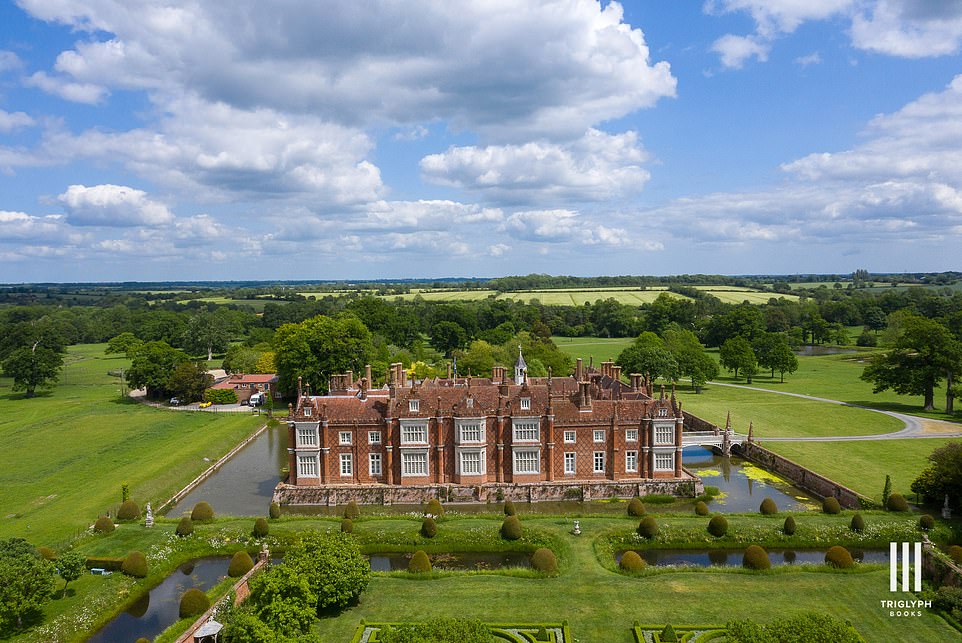 Helmingham Hall, built in the Tudor period, was reimagined around 1800 and enlarged for a family with enough sons to field a cricket team in the Victorian period

The zest with which Martin Fiennes enjoys Broughton Castle is infectious. It is as though the castle is an endlessly fascinating toy box.

He gestures to a pair of sofas, upholstered at the turn of the 20th century in crimson plush, made in the nearby village of Shutford.

‘Wouldn’t it be great to learn about the plush industry in 19th-century Oxfordshire?’ he says.

William of Wykeham, Bishop of Winchester and the Chancellor of the Exchequer who founded Winchester College and New College, Oxford, bought Broughton in 1377 and gave it to his sister’s grandson.

Swans gliding on the moat complete the picture of a magical place. Yet the history of this family has been a roller-coaster.

Highs of political favour and riches have been followed by lows of extravagance and financial catastrophes.

Sizing up the stately story

When Regency rake William, 15th Lord Saye and Sele, was asked by a servant what his orders were for the night, he replied: ‘Place two bottles of sherry by my bedside and call me the day after tomorrow.’

‘It’s home.’ That, says Alexander More-Molyneux, is the meaning of Loseley Park to him, his wife, Sophia and their four children. The house was built in the 1560s by Sir William More.

Early Georgian owner, Sir More Molyneux, who succeeded in 1719, can be seen in the family portrait in the great hall; his wife Cassandra bore him 11 children.

Surrounded by a splendid Baroque frame, bearing a coat-of-arms, the painting was presumably made for this position.

The estate forms a green bubble in a residential area, in commuting distance of London.

Overlooking the river Exe, Powderham was built around 1400, by a younger branch of the powerful Earls of Devon.

All the male representatives of the senior Devon line were subsequently beheaded or killed in the Wars of the Roses, so that Powderham’s owners themselves became Earls of Devon.It is now lived in by Charlie, 19th Earl of Devon, and his American actress wife A.J. with their two children. The original building, long and thin, has been extended numerous times.

In the mid-1750s otherwise- unknown plasterer John Jenkins was employed to create a dazzling scheme of helmets, shields, medallions, apples, bunches of grapes, violins, pan pines, oboes, arrows in quivers and much else, all in rococo plasterwork.

The 3rd Viscount, whose childhood name was Kitty, employed James Wyatt to build a large music room in the north-east corner — but as a homosexual he had to live abroad.

Today, community and healing are key words. The Dawlish Gardens Trust uses the walled garden and greenhouses to help people with learning difficulties and sensory problems.

Loading...
Newer Post
Man who shot his wife to death in front of their children in a crowded park found dead after Florida manhunt
Older Post
Sophie, Countess of Wessex has refused to take key advice from the Royal Family

Four months later than planned, the mobile phone tracing tool will be launched across the country

Four months later than planned, the mobile phone tracing tool will be launched across the country 0

£500 coronavirus grant: How to get the £500 low-income self-isolation payments 0

Sturgeon under pressure as hundreds protest against coronavirus restrictions 0