What an ass: Donkey has to be freed after it gets its head stuck in a plastic chair

My ass is stuck in this chair! Donkey is freed after getting its head stuck in plastic furnitureStray donkey was spotted in pain after


My ass is stuck in this chair! Donkey is freed after getting its head stuck in plastic furniture

A stray donkey made a right ass of itself when it needed rescuing by locals after it got its head stuck in a plastic chair in the United Arab Emirates.

Salem Al Kaabi, 43, spotted the struggling creature as he drove to his farm in Masfut, near Hatta, in Ajman.

He called some of his friends and family to help capture the stricken donkey before they managed to free it.

The chair is thought to have been left by a visitor to the area and it was digging into the animal’s snout and neck, breaking the skin beneath it.

Mr Al Kaabi, who works with the police, used a handsaw to free the donkey before disinfecting its injuries and then setting it free. 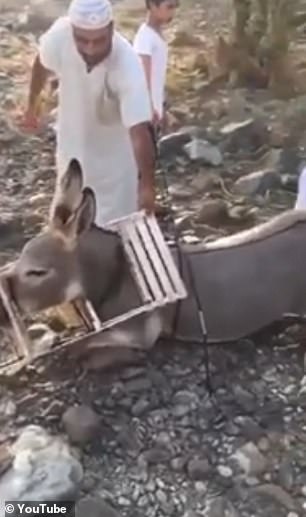 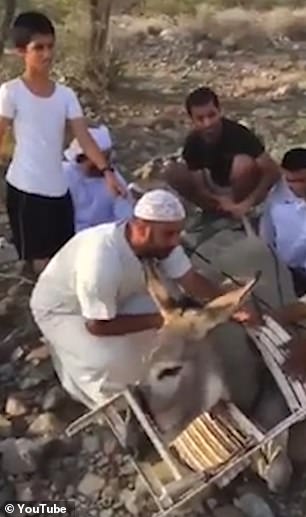 He told The National: ‘When the donkey saw us coming, she ran away and one of us followed her to the wadi and ‎managed to catch her and we all jumped in to help. ‎

‎’Seeing the donkey with a chair around her neck and face was unpleasant but it did not occur to me ‎that the chair would cause her severe injuries.

‎’It wasn’t easy to take the chair out so we needed tools and more hands to keep the donkey still.’ 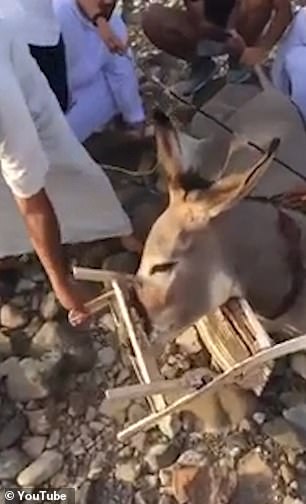 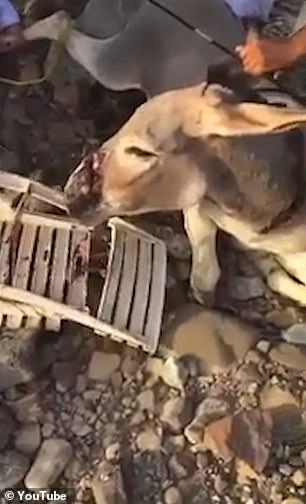 Locals had to free the injured donkey after it became stuck in a plastic chair near Hatta, in Ajman

He said he suspected the chair was left behind by visitors to the nearby town of Hatta and called littering in the area ‘unacceptable’.

Mr Al Kaabi is now searching for the injured donkey, which he and ten people freed last Friday, after an animal rescue centre offered to to examine and treat it.

‎’She is probably hiding due to her pain and we need to find her before his condition becomes ‎worse.‎’